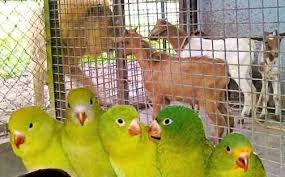 Brief history of the university of Ibadan zoological garden.
The University of Ibadan, Zoological Garden was established in Ibadan north local government area of oyo state in 1948. It was established primarily as Menagerie (where few species of animals were kept) to support teaching and research in the Department of Zoology of the university of Ibadan. The zoo was initially operated as a mini zoo until 1974, when the goal of making the zoo of international standard was achieved under the administration of Sir Bob Golden, a European, a curator and the Director of the zoo as at that time. Sir Bob Golden liased with some foreign countries in acquiring some species of wild animals like the Gorilla that was brought from Cameroon although its dead and embalmed now, the henya that was gotten from Kenya and some other animals.
Basically the University of Ibadan zoological garden, practices Ex- situ conservation which entails conservation of animals outside its natural habitat. This done to ensure the existence of these animals and to prevent some of the animals whose existence are endangered from going into extinction. The management does its best in providing a suitable habitat for these animals, feeding them with the right food for continuity of these species…I.T-REPORT-mike2